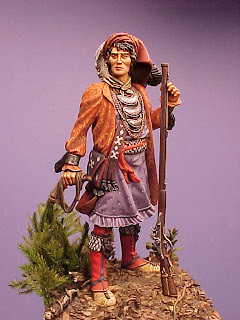 My latest figure is of the great Seminole Chief Osceola (1803-38). The figure is from Romeo Models and was wonderfully sculpted by Maurizo Bruno. It's not my era or subject of choice but I was commissioned and took the challenge.

The casting was one of the best I've come across. The only problem is that I can be an impatient painter. I put together the entire figure before painting....bad idea. The feathers, of course, got in the way, as well as the right arm which got in the way of painting the pouch. For a figure that could have multiple patterns on it's clothing this was a difficult paint job. In hindsight, I should have left the feather and the right arm off and made myself paint the entire figure first.

This subject could be painted a hundred different ways. The patterns for the clothing I used came from a mixture of examples from a period textile website.

Although a headache at times it was a fun figure to paint. I apologize for the lousy pic's. Having the dial-up and camera I have, it's difficult to see the true quality of the picture. 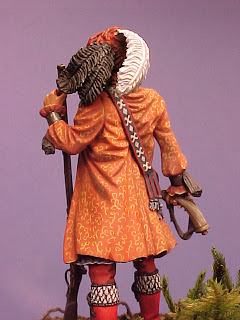 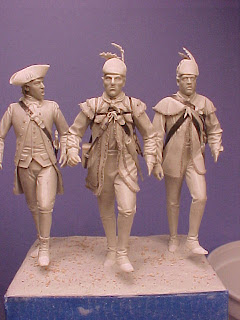 My latest vignette depicts veteran Continental infantrymen during the later part of the American Revolution. Two of the soldiers wear the popular and
practical "hunting" shirt. Their weapons & gear is a variety of foreign import and American made. The muskets, for example, are the model 1766, French Charleville. By the close of the war, most soldiers in the Continental Army were armed with this weapon. The central figure carries a tin cartridge canister. These were issued to overcome a shortage of leather boxes.

The officer, trying to retain a more military appearance, wears a uniform coat which was made up at his expense.

The figures were sculpted with Aves. Heads are from the 1/32 scale Hornet line. The muskets are Shenandoah conversions.

A big thanks goes to Gary Dombrowski for his help with uniform and gear information. 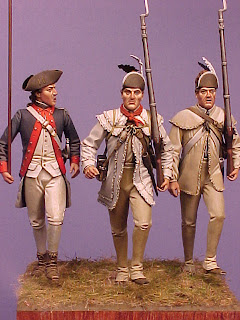 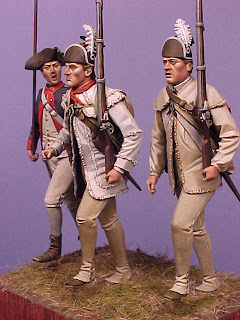 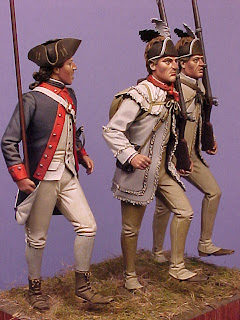 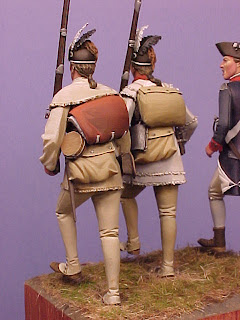 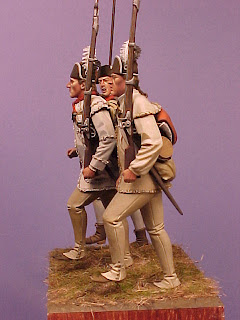 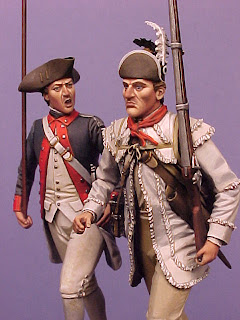