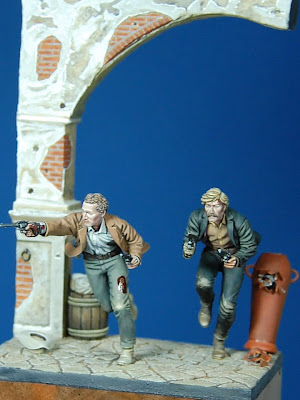 Before MFCA, I was given some advice from a wise veteran of the show scene. And he gave me some suggestions on how to help frame this vignette.
I was a bit reluctant at first, because I didn't want to crowd the scene with too much "stuff". I thought about it for a day or so and decided it wouldn't hurt to add a hat or something. Instead, I added all the elements he suggested would look good. Well, it worked out better than I thought!

The hat is scratchbuilt as is the pack sitting on the barrel. I spent a while on the vase. I needed something thin enough to fit on Sundance's left and not to look like he just knocked it over while running by. The exploding vase was fairly simple. I took a small sharp strip of clear plastic and used it as a armature for the epoxy "water". I then added the pottery shards. 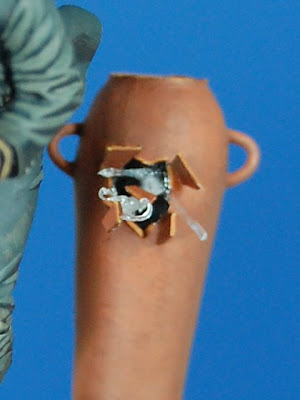 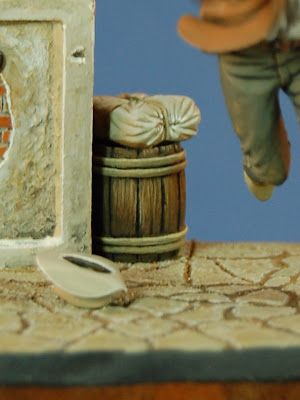 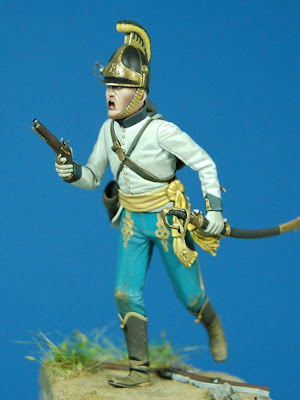 I made it! And I'm burned out. I'm not touching a brush for a few weeks or so. After a couple all nighters, I get tired just looking at a bottle of paint! 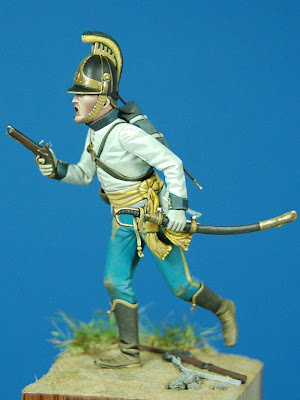 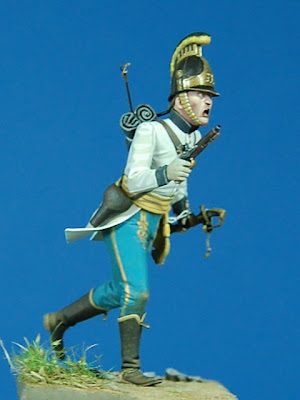 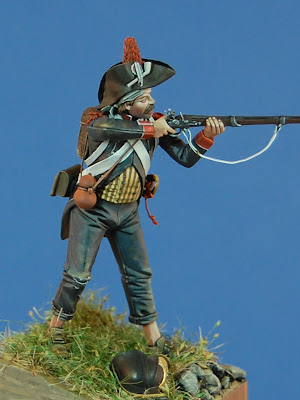 Here's the painted Frenchman. I gave him a striped vest to add more color. I'm pretty satisfied on how he turned out.

I'll add pics of the Austrian soon. Thanks for following. 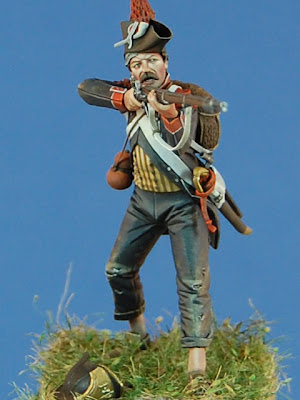 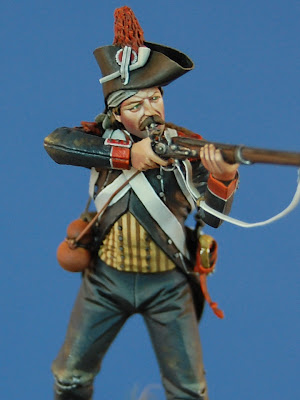 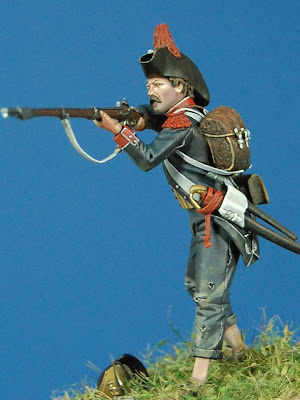 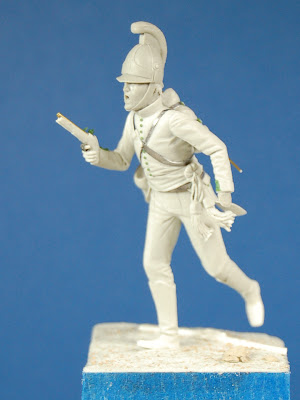 I just primed these two but here is the "raw" version. I like the expression on the Austrian, as it really fits the pose. Both heads are from Historex.

The pistol on the officer is my first totally scratch built firearm. Just bent brass rod and putty body.
It turned out better than I thought and am satisfied.

The reference for both figures is Osprey's "Napoleon's Campaigns in Italy". I wanted to do something different with the officer and give him a "on campaign" look. All the illustrations of Austrian officers, be him a company or field offcer, all looked smart without any burden other than his sword and or pistol holster. I find this hard to believe. While, I know there was a class system and officers tended to seperate themselves from the lowley ranks, they where still soldiers and shared the same privations on the march like the men the lead. This means carrying their own gear and such. I doubt highly the company grade officers had a special wagon for their bed-roll/ knapsack. For this figure I chose a bed-roll style arrangement with his greatcoat folded in the same manner as the men's. I found an illustration of an Austrian artilleryman with a similiar set up. The cane attached to his greatcoat roll is something I thought would be a practical place for it. All officers and even NCO's carried these "sticks". It was really just a symbol of rank and was carried on campaign.

Some coats of Austrian officers had no turnbacks. To save money and yet look smart, some coats were made without this embelishment.

The French carabinier was a fun sculpt. Much more character than his Austrian adversary. I really liked how the bi-corn hat turned out. From what I read, the men turned their hats in this fashion so as not to interfere with the loading motion. I added a pipe to add to that character.

Now, for the next two weeks, I'm going to be a painting fool!! 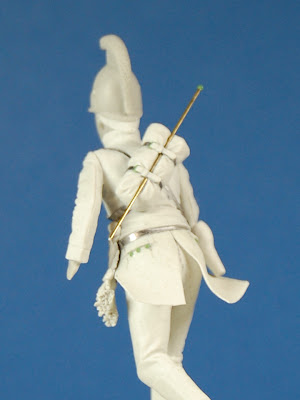 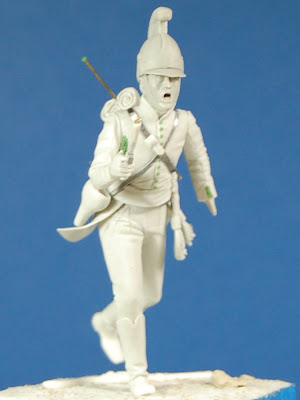 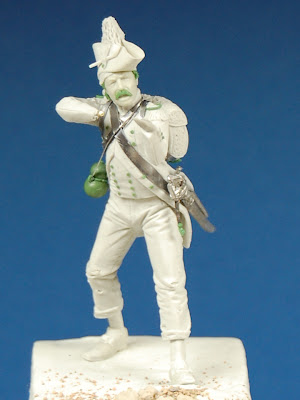 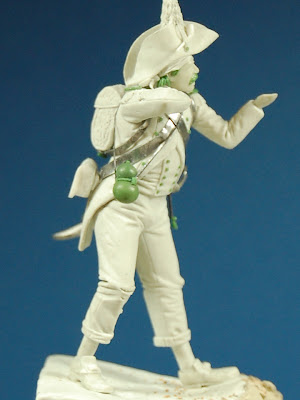 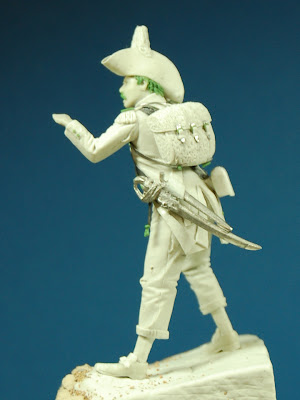 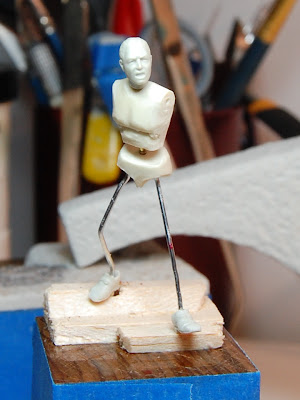 I'm working overtime on these two fellows to have them finished in time for MFCA...I hope. The projects are not being rushed, because it will show, I'm just spending lots of hours on them.

The Austrian armature was built already when he designed to be part of a vigentte I planned several months ago. That plan fell through and now he will be a stand alone.

The other figure will be a French carabinier during Napoleon's campaign in Italy. He will be ragged fellow in a action/firing pose.

These two projects are about 80% finished and I should have pics soon of the pre-primed pieces. 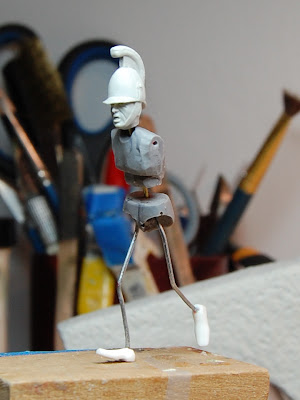