I painted this bust for a collector with the commission to make some alterations to the casting. The main one being in the form of adding a shirt! There was a specific shirt the collector wanted featured and I was given the task of how to show it off.

The bust, which is wonderfully sculpted by John Rosengrant, is one BIG hunk (1/9th scale-200mm) of resin! At first I had some reservations, because it would take some considerable surgery to make this work. So, knowing it was common for soldiers to open their jackets in warm weather for air ventilation, I began carving away ALOT of resin. Enough to sculpt a shirt and the edge of the jacket...Also compinsating for the space by adding more putty to "arm" side of the jacket.

Painting the figure was a pleasure. It's not a scale I'd like to paint often, but it offered a challenge. Particularly the shirt pattern, which is based on a specimen in the TIME-LIFE book
"Echoes Of Glory-Arms & Equipment of the Confederacy". Not being able to show the entire look of this wildly patterned shirt, I do hope the collector will get a good suggestion of it.

The coverlet was copied from a period one I own. Although the one I own has a little more detail in regards to the weave, it does give a good impression. I added a little weathering to it by adding dirt stains and bits of "grass" fibers to the nap of the coverlet. This is something I noticed, while reenacting, on alot of uniforms and equipment. When sitting or lying down in the field you often pick up some tiny bits of debris. I remember this particular "look" of my coverlet after lying it down on the side of a dusty road. This type of weathering is often over-looked to modelers.
Posted by Jason at 2:34 PM No comments: 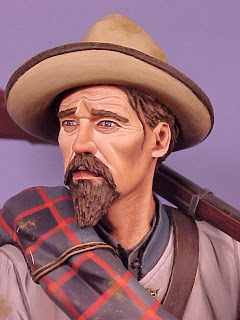 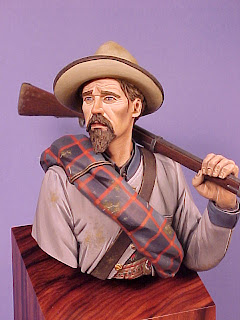 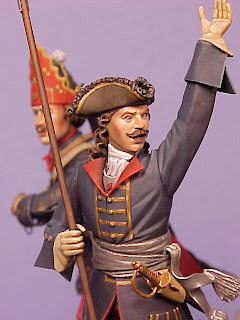 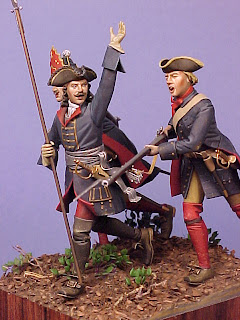 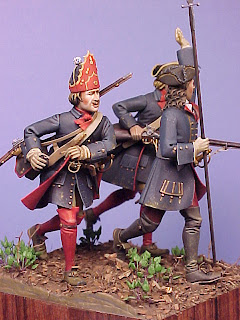 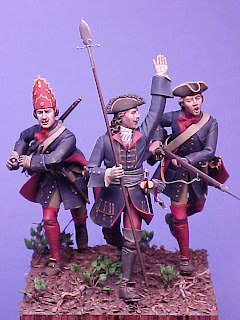